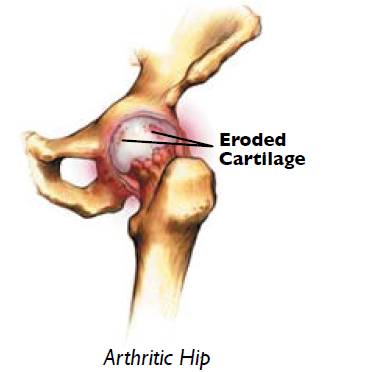 Total hip joint replacement is an orthopaedic success story, enabling hundreds of thousands of people to live fuller, more active lives. Using metal alloys, high-grade plastics, and polymeric materials, orthopaedic surgeons can replace a painful, dysfunctional joint with a highly functional, long-lasting prosthesis. Over the past half-century, there have been many advances in the design, construction, and implantation of artificial hip joints, resulting in a high percentage of successful long-term outcomes. 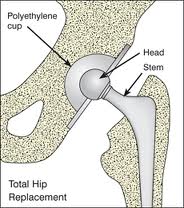 The hip joint is called a ball-and-socket joint because the spherical head of the thighbone (femur) moves inside the cup-shaped hollow socket (acetabulum) of the pelvis.

To duplicate this action, a total hip replacement implant has three parts:

Each part comes in various sizes to accommodate various body sizes and types.

In some designs, the stem and ball are one piece; other designs are modular, allowing for additional customization in fit.

Several manufacturers make hip implants. The brand used by your doctor or hospital depends on many factors, including your needs (based on your age, weight, bone quality, activity level, and health), the doctor’s experience and familiarity with the device, and the cost and performance record of the implant. These are issues you may wish to discuss with your doctor.

Many people credit Sir John Charnley, a British orthopaedist, with performing the first modern total hip replacement. His innovations included combining a metal stem and ball with a plastic shell and using a methacrylate cement to hold the devices in place.

Today, the stem portions of most hip implants are made of titanium- or cobalt/chromium-based alloys. They come in different shapes and some have porous surfaces to allow for bone ingrowth.

Cobalt/chromium-based alloys or ceramic materials (aluminum oxide or zirconium oxide) are used in making the ball portions, which are polished smooth to allow easy rotation within the prosthetic socket.

The acetabular socket can be made of metal, ultra-high molecular-weight polyethylene, or a combination of polyethylene backed by metal.

All together, these components weigh between 14 and 18 ounces, depending on the size needed.

All the materials used in a total hip replacement have four characteristics in common:

During a total hip replacement surgery, the orthopaedic surgeon will take a number of measurements to ensure proper prosthesis selection, limb length, and hip rotation. After making the incision, the surgeon works between the large hip muscles to gain access to the joint.

The femur is pushed out of the socket, exposing the joint cavity. The deteriorated femoral head is removed.

The acetabulum is prepared by cleaning and enlarging it with circular reamers of gradually increasing size. The new acetabular shell is implanted securely within the prepared hemispherical socket. The plastic inner portion of the implant is placed within the metal shell and fixed into place.

Next, the femur is prepared to receive the stem. The hollow center portion of the bone is cleaned and enlarged, creating a cavity that matches the shape of the implant stem. The top end of the femur is planed and smoothed so the stem can be inserted flush with the bone surface. If the ball is a separate piece, the proper size is selected and attached. Finally, the ball is seated within the cup so the joint is properly aligned and the incision is closed.

Hip replacements may be cemented, cementless, or hybrid (a combination of cemented and cementless components), depending on the type of fixation used to hold the implant in place. Although there are certain general guidelines, your surgeon will evaluate your particular situation carefully before making any decisions. Do not hesitate to ask which type of implant will be used in your situation and why that choice is appropriate for you.

Over the past 40 years, there have been many improvements in both the materials and the methods used to hold the femoral and acetabular components in place. Today, the most commonly used bone cement is an acrylic polymer called polymethylmethacrylate (PMMA).

A patient with a cemented total hip replacement can put full weight on the limb and walk without support almost immediately after surgery, resulting in a faster rehabilitation. Although cemented implants have a long and distinguished track record of success, they are not ideal for everyone.

Cemented fixation relies on a stable interface between the prosthesis and the cement and a solid mechanical bond between the cement and the bone. Today’s metal alloy stems rarely break, but they can occasionally loosen. Two processes, one mechanical and one biological, can contribute to loosening.

Despite these recognized failure mechanisms, the bond between cement and bone is generally very durable and reliable. Cemented total hip replacement is more commonly recommended for older patients, for patients with conditions such as rheumatoid arthritis, and for younger patients with compromised health or poor bone quality and density. These patients are less likely to put stresses on the cement that could lead to fatigue fractures.

In the 1980s, new implant designs were introduced to attach directly to bone without the use of cement. In general, these designs are larger and longer than those used with cement.

The orthopaedic surgeon must be very precise in preparing the femur for a cementless impact. The implant channel must match the shape of the implant itself very closely. New bone growth cannot bridge gaps larger than 1 mm to 2 mm.

Your surgeon may recommend a period of protected weight-bearing (using crutches or a walker) to give the bone time to attach itself to the implant. This protected weight bearing helps to ensure there is no movement between the implant and bone so a durable connection can be established.

Cementless femoral components tend to be much larger at the top, with more of a wedge shape. This design enables the strong surface (cortex) of the bone and the dense, hard spongy (cancellous) bone just below it to provide support.

The acetabular component of a cementless total hip replacement also has a coated or textured surface to encourage bone growth into the surface. Depending on the design, these components may also use screws through the cup or spikes, pegs, or fins around the rim to help hold the implant in place until the new bone forms. Usually these components have a metal outer shell and a polyethylene liner.

The pelvis is prepared for a cementless acetabular component using a process similar to that used in a cemented total hip replacement procedure. The intimate contact between the component and bone is crucial to permit bone ingrowth.

Initially, it was hoped that cementless total hip replacement would eliminate the problem of bone resorption or stem loosening caused by cement failure. Although certain cementless stem designs have excellent long-term outcomes, cementless stems can loosen if a strong bond between bone and stem is not achieved.

Patients with large cementless stems may also experience a higher incidence of mild thigh pain. Likewise, polyethylene wear, particulate debris, and the resulting osteolysis (dissolution of bone) remain problems in both cemented and uncemented designs. Improvements in the wear characteristics of newer polyethylene, and research into newer bearing surfaces may help resolve some of these problems in the future.

Although some orthopaedic surgeons are now using cementless devices for all patients, cementless total hip replacement is most often recommended for younger, more active patients and patients with good bone quality where bone ingrowth into the components can be predictably achieved. Individuals with juvenile inflammatory arthritis may also be candidates, even though the disease may restrict their activities.

A hybrid total hip replacement has one component, usually the acetabular socket, inserted without cement, and the other component, usually the femoral stem, inserted with cement. This technique was introduced in the early 1980s, so long-term results are just now being measured. A hybrid hip takes advantage of the excellent track records of cementless hip sockets and cemented stems.

Hip resurfacing is an emerging procedure, most commonly performed in younger patients. It is too early to assess the long-term success of this procedure.

Hip replacement operations are highly successful in relieving pain and restoring movement. However, the ongoing problems with wear and particulate debris may eventually necessitate further surgery, including replacing the prosthesis (revision surgery). Men and patients who weigh more than 165 lb have higher rates of failure. The chance of a hip replacement lasting 20 years is approximately 80%.

Co-developed with AAHKS
AAOS does not review or endorse accuracy or effectiveness of materials, treatments or physicians.

23 thoughts on “Hip Implants – from American Academy of Orthopaedic Surgeons”