Resons for loosening of hip replacement implants over time

The most common problem with hip replacements is that they begin to loosen over time. Infections and breakage of implants are uncommon, but potentially severe complications. 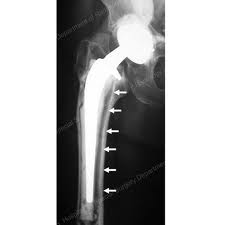 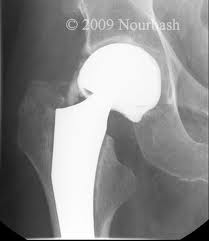 Furthermore, with improvements in sterile technique and medical treatment of infections, the very serious complication of joint prosthesis infection has also been reduced. Now, the most common cause of joint replacement loosening is due to wear of the implant surfaces, and the subsequent weakening of surrounding bone. This problem is called osteolysis, and it causes the hip replacement to loosen over time.

What happens when osteolysis occurs?
Osteolysis is a problem that causes the bone surrounding the implant to seemingly ‘melt away’. The weakening of bone around the hip replacement is seen on x-rays, and looks as though there are holes in the bone around the joint replacement. Because of the weakened bone, the hip replacement become loose, and begins to wobble within the bone. Patients experience symptoms of pain and limitations in motion of the hip. The technical name for this weakening of bone is called osteolysis.

What is ‘cement disease’, and how is this different from osteolysis?
In years past, this problem of holes in the bone seen on x-ray was called ‘cement disease’. This name comes from the fact that initially doctors did not know the cause of the weakening of bone. Because cement was used in the hip replacements, the problem was wrongly assumed to be due to the cement, thus the name cement disease. The name stuck, although it is now known that the cement is not the problem.

How are these new implants thought to last longer?
The new implant devices tend to have much smaller wear particles; these are the debris particles that accumulate over years as the joint wears, much like the rubber wears off your car tires. In addition to having smaller wear particles, the overall volume of wear in these implants is also less than the traditional metal-on-polyethylene implants. However, it is not known yet if these different types of implants will actually lower the rate of loosening of the implants over time. Furthermore, there may be other complications associated with the use of these different types of hip replacement implants.

Unfortunately for patients there is no definitive answer as to which type of implant is “best.” The reason for this is in order to evaluate the long-term success of these newer types of implants, studies need to continue for many more years and include more patients. Many surgeons have a strong preference towards one type of hip replacement implant, and may use this in all patients because of their familiarity with that particular implant. If you have questions about what type of implant is being used in your hip replacement, you should discuss this with your doctor.