This YouTube video clip from the very respected McMinn Centre in the UK – the original developers of the Birmingham Hip Resurfacing – is quite enlightening.

The video highlights metal-on-metal problems in replacement hips have been known for 20 – 30 years or more.

It appears from this scientific report that Corin was involved with the early manufacture and that they or their contractor made changes to the manufacturing process, apparently without the surgeon’s knowledge and this contributed to metallosis and failure compared to the original “as cast” cobalt chrome implants. 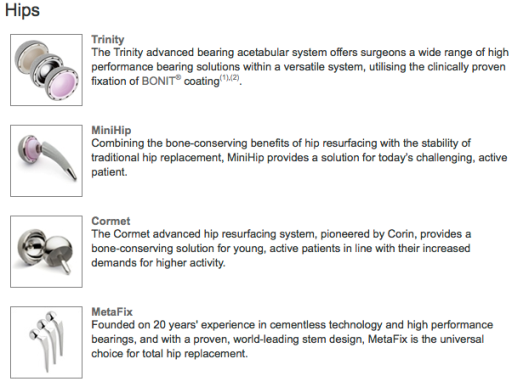 Today’s younger patients demand more from their surgery – a long-lasting implant and a return to previous levels of activity. Cormet offers the choice of both cementless and cemented femoral components with optimised geometry, allowing minimal bone removal. The stable low-wear bearing forms an enduring bone-conserving implant, facilitating patient expectations of a return to an active lifestyle.

From the pioneers of modern day hip resurfacing, the Cormet is founded on over 20 years’ expertise in metal-on-metal hip resurfacing. Based on an early vision in the late 1980s, the Cormet advanced hip resurfacing system was launched in 1997 and today offers surgeons a wide range of implants, including the only proven cementless head, to treat the young, active patient. 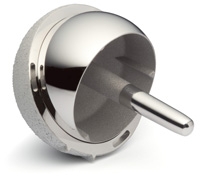 1. Angadji A, Royle M, Collins SN, Shelton JC. A hip simulator study on the effect of cup inclination on the wear of ‘as cast’ and ‘double heat-treated’ metal-on-metal hip replacements. ORS March 2007: Poster. 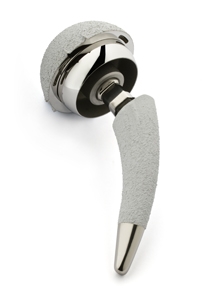 Optimom, part of Corin’s Total Cementless Hip System is a large metal bearing that locates on a femoral stem (such as Corin’s MiniHip or MetaFix), and is articulated against the Cormet resurfacing cup to create a large diameter metal-on-metal (LDMOM) bearing for use in a total hip replacement.

LDMOM bearings are intended for use in young, active patients, as a revision option for patients with resurfacing heads or as a primary option for patients not suitable for resurfacing. The large diameter heads produce lower dislocation rates and an increased range of motion when compared to conventional total hip replacements, which together permit the patient to return to high activity levels(1).