I had the privilege of some very insightful correspondence this morning!

This is a fantastic “blinding flash of the obvious” – please read on!

PS – Just over 3 weeks since the operation. A little sore today and so I may not spend too much time at the computer – off for a walk and some natural pain management. Look forward to your continued input.

I am a mid-30’s female in the States and was diagnosed with severe bilateral acetabular dysplasia a year ago. 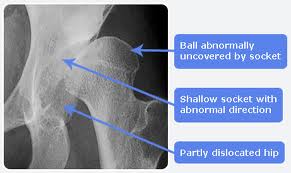 Thankfully I was quickly referred to the brilliant, caring team at Children’s Hospital Boston in affiliation with Harvard Med. School who acted quickly and performed two very successful Peri-acetabular osteotomy (PAO) surgeries (joint-preserving surgeries) on my hips in the past nine months.

The surgeries are very intense, as they involve breaking the pelvis in three places to more securely anchor the femoral head under the acetabulum, but if done before the onset of OA, can effectively restore the joint to its maximum function and eliminate symptoms for a lifetime (and also eliminate the need for a hip replacement down the line.)

I was so thankful that I found the Hospital Team and the PAO before it was too late and a replacement was the only option.

I have heard from my surgeons time and time again that hip dysplasia is the #1 cause of OA- and by extension, the #1 reason for hip replacements– yet there is a STAGGERING lack of awareness of hip dysplasia in humans in our society.

Not only that, but many patients who present with dysplasia symptoms consult with orthopedic surgeons who do not (for whatever reason) know about joint-preserving surgeries such as the PAO, and tell them they will need to tough it out “until they need a hip replacement.”

At the risk of sounding like a total conspiracy theorist, I have serious questions as to why there is such a lack of information (pharmaceutical industry cover-up??) on the PAO surgery and hip dysplasia, and why we are bombarded with information on joint replacements.

Obviously is it not in the best interest of DePuy, or other manufacturers’ bottom lines to make information about alternative, preferred treatments to dysplasia available.

It just makes me sick that even though one in every 1,000 babies is born with some degree of dysplasia, it is still more well known in dogs than in humans.

I saw a segment on the daytime TV show, “The Talk” today about the education tour you reference in one of your posts, DePuy’s “Anatomy of Movement Experience.”

It’s spokeswoman, actress Jane Kazcmarek (compensated for her promotion) talked at length about how her bilateral hip replacements before age 55 were “the best decision she ever made.”

I suspect based on her description of her symptoms that she had dysplasia, though she never referenced a diagnosis.

Also, there was not one mention of dysplasia as the #1 cause of OA in hips.

When I went to the website for this advertising campaign (masquerading as an educational exhibit) I found no reference to dysplasia whatsoever (in fact, the so-called “Osteoarthritis Backgrounder” fact sheet they included on the website said that the causes of OA are “largely unknown.”)

I wasn’t surprised, but yes, I was upset. I immediately emailed DePuy’s rep, as well as my surgeons at HMS, mostly just to make myself feel better!

Best wishes, and with thanks,

MY response to ML

Thank you so much for your story.

What you tell me fills in a really big gap in my thinking. You make some great points about Dysplasia.

I wonder if I had some Dysplasia originally? Just enough to set it off.

Thank you for your story and I look forward to staying in touch.

ML’s Response to me – here comes the blinding flash of the obvious!!!

Hi Earl, it is great to hear back from you so quickly and thanks again for your great blog.

Actually funny you mention that – I was looking through your story on your blog, and I believe you had included medical notes from your initial surgery, and they reference you as having a “mildly dysplasic right hip.”

A “dysplasic” hip is a hip that has dysplasia. If caught early enough (on a simple x-ray, I can literally spot dysplasia now and I’m not even a doctor), dysplasia can be completely corrected.

Somehow it doesn’t surprise me that no one ever pointed your dysplasia out to you, though I am so sorry that is the case and you have had to deal with all of this.

Often it is caught in infants, but if missed, can cause a lifetime of suffering.

What’s so troubling is that so few people know about dysplasia and the corrective surgeries that can fix it.

Uncorrected, a dysplasic hip (as you know from firsthand experience) will almost certainly develop OA, and unfortunately this tends to happen in younger patients.

I was diagnosed with dysplasia at at age 29 while training for a half marathon and complaining of dull groin pain, and literally three months later was on the operating table, voluntarily having my pelvis broken in three places to correct the dysplasia.

Six months later (after learning how to walk again) I was on the table again, this time for the right hip- this was five weeks ago. I am now 30 years old and learning to walk again for the second time this year.

Though my symptoms were really, really minimal at that point, I knew from the stories of others with dysplasia that the clock was ticking down and I didn’t want to wait until my window of opportunity to have the PAO was over (once OA really takes hold in the joint, PAO is no longer an option and the joint must be replaced.

That’s why time is of the absolute essence.

Interestingly, osteoarthritis of the hip is generally accepted to be a secondary diagnosis in North America today, at least: a whopping 80% of hip OA cases are attributable to a primary developmental issue (43% of those being attributable to hip dysplasia alone.)

Only 20% of hip OA cases are primary (and most of those present in much, much older patients- not young like us!) Source: http://www.orthojournalhms.org/volume11/manuscripts/PDF/V11_om_13.pdf

I shudder to think if I hadn’t been referred to to the Team by my primary doc here in Boston when I first showed up complaining about stiff hips a year ago. However, I feel strongly that I need to get out there and make sure others who may be candidates for these surgeries can learn about them before it is too late.

I definitely recommend you check out the Hip Dysplasia and Impingement Support group, “Hip Chicks Unite” (as most of us dealing with this are female, though not all, obviously- there are some guys on there!:). There is a forum on there where virtually every conceivable question related to THR and PAO has been asked. There are also links to the blogs of dozens of women who have been diagnosed with dysplasia and had surgeries- PAO and replacements. http://hipchicksunite.ning.com/

Simply stated, there is no one with a vested interest or a strong enough incentive to spread information about joint-preserving surgeries such as the PAO.

Pharma companies don’t stand to profit, and would prefer that folks just wait for it to get bad enough to need a replacement.

That’s why you see virtually no mention of dysplasia or the PAO on websites such as the Arthritis Foundation’s www.arthritisfoundation.org, or (obviously) on DePuy’s website.

It is logical, but it is also sickening as the patients stand to suffer for the corporation’s profit.

Let me know what I can do to help. Best to you, and thank you again for your hard work in bringing the truth to light!

Also, there is a list of surgeons (unfortunately I believe all of these are in the USA, though there may be another list online that includes Europe/AUS/NZ) who are very well informed on hip dysplasia and the PAO which I first came across when I was researching my condition.  You may want to include that link, as well:  http://hipuniverse.homestead.com/files/PAOSurg.htm

One more helpful resource for your readers:  the very informative blog of a woman who had both PAO’s done two years ago.  She does a wonderful job of cataloging the whole experience:  http://hipfix.blogspot.com/

One of my (many) x-rays is attached to this email.  This was taken after my left hip PAO surgery last spring (bearing in mind that the left hip is on the right side when you are looking at the x-ray, it’s the side with the massive screws!)

Note how the degree of coverage of the pelvis over the top of the left femur is so much greater than that of my as yet uncorrected right side (left when you are looking at the x-ray.)

Before the operation, my left hip was even worse than my right.  If the dysplasia were to have gone uncorrected, due to the misalignment of the joint, the cartilage would have worn away quickly leaving me with crippling OA and the need for bilateral replacements (likely before I would hit age 40 or 50.)

8 thoughts on “Is Dysplasia an underlying condition which leads to Osteoarthritis later in life?”