Hip dysplasia is a condition in which the hip joint, a synovial ball and socket joint (a diarthrosis), becomes unstable, typically because the bones and/or supportive soft tissues (joint capsule, ligaments) of the hip have developed or grown abnormally in utero. With hip dysplasia, the hip socket (acetabulum) usually is shallow and does not hold the ball (femoral head) securely; in addition, the femur may be abnormally twisted, causing increased forces at the hip joint. Over time, associated looseness (laxity) of support ligaments and pulling of hip muscles allows increased movement of the femoral head within the acetabulum, resulting in abnormal forces on the joint surfaces that cause joint instability, degeneration, and chronic pain.

With hip dysplasia, the surfaces of the hip joint (the femoral head, or “ball” and the acetabulum or “socket”) may experience incomplete contact (subluxation) or a total loss of joint contact (dislocation). The severity of hip dysplasia is rated according to the extent of contact between the femoral head and the acetabulum and signs of osteoarthritis as viewed on x-ray. Although hip dysplasia is typically first recognized in infants, mild hip dysplasia may not be diagnosed until adulthood. Hip dysplasia is a common cause of hip pain in young adults and, if left untreated, can lead to early degenerative changes (osteoarthritis) of the hip joint. Hip dysplasia is a cause of degenerative changes in the hip leading to hip replacement surgery in adults (Millis).

Risk: Individuals at increased risk for hip dysplasia are those of Native American or Lapp (people indigenous to northern Scandinavia) descent; those of African or Chinese descent have markedly lower risk (McCarthy). There is a strong genetic component; individuals with a family history of developmental hip dysplasia are 10 times more likely to experience the condition than those without (McCarthy).

The risk is highest in females, first-born children, those born in a breech position, and in those experiencing fetal intrauterine crowding or malpositioning. Up to 85% of congenital hip dysplasia occurs in girls (Tham). The left hip is most commonly affected, secondary to the increased incidence of intrauterine positioning in which the left hip of the fetus is compressed against the mother’s sacrum (McCarthy).

Individuals with neuromuscular disorders (e.g., cerebral palsy, arthrogryposis, myelomeningocele), those with connective tissue disorders of ligamentous laxity (e.g., Ehlers-Danlos syndrome), and those with scoliosis or torticollis are also at increased risk (Manaster).

Incidence and Prevalence: Developmental hip dysplasia is present in 100 per 100,000 individuals (McCarthy) and is bilateral in up to 33% of cases (Manaster). In one study, 43% of individuals with hip osteoarthritis also had hip dysplasia (Kim).

History: The individual may report a gradual (insidious) onset of hip and/or groin pain that may radiate into the thigh or buttocks and may report instances of catching or locking sensations in the hip joint with movement. There may be pain at the outer (lateral) hip from muscle fatigue that worsens toward the end of the day or after prolonged sitting or walking, particularly on hilly terrain. The individual may report a history of hip problems and previous non-operative interventions such as being double-diapered or wearing a brace during infancy to help correct congenital hip dysplasia.

Physical exam: Upon exam, range of motion testing generally is normal, although the involved hip may be stiff with attempted movement into abduction and extension due to tight adductor and hip flexor muscles or if severe hip joint subluxation is present. As the hip develops degenerative changes, internal rotation becomes progressively decreased. Leg lengths may be unequal if the hip is fully dislocated, or if growth of the proximal femur was retarded in childhood. Stress tests of the hip joint may reveal instability or clicking of the hip joint. Strength testing of the involved limb may reveal pain and weakness with resisted hip abduction. The individual may exhibit a limping gait pattern in which the pelvis drops toward the unaffected side when weight bearing on the affected limb (Trendelenburg gait pattern); alternatively, the trunk may lurch toward the affected side (abductor lurch) when the affected limb is in the stance phase of gait.

Tests: Abnormalities of the hip joint may be viewed on x-rays taken in a neutral standing (weight bearing) position; in a “false profile” view, in which the individual stands at an angle to the imaging plate; and also in a position of abduction and internal rotation (AIR) to assess alignment of the femoral head within the acetabulum (Sucato). Ultrasound scanning is commonly used in assessment of the infant hip, but is less commonly used for adult diagnosis. Rarely, computed tomography (CT) scan and magnetic resonance imaging (MRI) may be done to rule out potential tears of the cartilaginous ring that surrounds the acetabulum (acetabular labrum), other cartilage defects, and other soft tissue disorders that may exist concurrently with hip dysplasia. 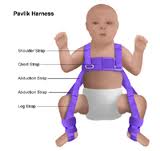 In infants, hip dysplasia is treated with external bracing (e.g., Pavlik harness) to hold the hips in flexion and mild abduction and external rotation to allow normal development of the hip joint capsule and deepening of the acetabulum. When hip dysplasia is diagnosed during the neonatal period, the harness usually is worn all day and night during about 6 weeks until stabilization of the hip, followed by another 6 weeks of weaning. When treatment is started later or when the hips are more unstable, a longer period of use of the harness may be necessary. Mild cases may be treated by “double diapering” to keep the lower extremities in an abducted position.

In adults with mild symptoms, conservative treatment is indicated using nonsteroidal anti-inflammatory drugs (NSAIDs), activity modification to reduce compression of the hip joint (e.g., minimize prolonged standing and walking), and implementing joint protection strategies to prolong the longevity of the hip joint. A cane in the contralateral hand may decrease pain and decrease the magnitude of the limp. Individuals who are overweight or obese are encouraged to lose weight to decrease the loading forces on the hip joint. 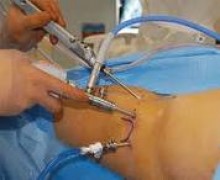 In some cases of mild to moderate hip dysplasia, arthroscopic surgery may be performed to “clean out” the hip joint by removing loose cartilage fragments, débriding a torn acetabular labrum, or removing portions of inflamed synovial tissues. With older children and younger adults with severe hip dysplasia, surgery to realign the hip joint (proximal femoral osteotomy and/or peri-acetabular osteotomy) may be necessary to restore congruence of the joint surfaces, preserve the hip joint, and reduce hip pain.

With proximal femoral osteotomy, the surgeon cuts through the top of the femur and repositions it to improve the biomechanical alignment of the femoral head with the acetabulum, securing the femur in place with plates and screws. With peri-acetabular osteotomy, the surgeon cuts the acetabulum away from the pelvis and rotates it into a new position to better hold the femoral head. Tendon release of tight hip flexor and adductor muscles also may be necessary (Manaster).

11 thoughts on “Hip Dysplasia – all you didn’t want to know!”