Dr Sachin Bhonsle, Consultant Orthopedic Surgeon took up a challenge to perform the 6th followed by 7th revision putting the patient back on her feet. Sixth is a preparatory for the final revision (7th surgery).

Patient Ms Nadia, a teacher from Baghdad had a childhood injury to her right hip which damaged the joint progressively till it developed arthritis. When she was 40 years of age she decided to opt for a total hip replacement which was performed in her own country. The surgery did not yield good results and her joint soon dislocated. She had to undergo second surgery to revise the socket. This surgery gave her benefit but only for two years.

In 2002 the hip developed problems once again and she had to have a revision surgery for the third time. This failed again after three years.

Reasons for failure:-
1. Unstable joint replacement and poor soft tissue balance
2. Early wear and tear because off poor alignment
3. Loosening because of inadequate fixation in bone and suboptimal cementing
4. Extensive soft tissue scarring and inexistent muscles because of repeated operation in same place

Meanwhile destiny gave her a sixth chance, having suffered for so long Ms Nadia mustered the courage to rectify her problem and decided to come down to India and get operated upon her hip once again.

Dr Sachin Bhonsle says “This case is a fine example of a very complicated hip replacement operation as Nadia had undergone several hip replacements before and those operations were failures. Bone had become brittle due to intense scarring and there was a major possibility of fracture. Nerve damage was possible during approaching such hips because of nerve entrapment in severe scarring. Her poorly controlled diabetes proved a further challenge.” 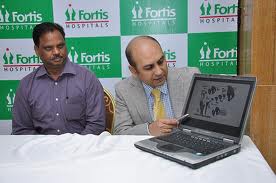 Dr Bhonsle had to first perform the surgery (6th) to remove all the implants, bone cement and clean up the infection. He performed the final revision surgery (7th surgery) during 1st week of July.

“I opened up the wound and thoroughly cleaned it again. I first prepared her socket (used a cement less socket of a modern design which can last for many years) and put some bone grafts in the depth. Then i went on to prepare the femur which proved a huge challenge. There were many holes and breaks in the femur. I had to use a titanium stem of great length to span breaks in the bone. In addition i had to strengthen the bone using- bone grafts, titanium mesh, plates and screws. It took almost 7 hours to complete the procedure with satisfaction.” adds Dr Bhonsle.

The surgery was successful with an uneventful recovery and Nadia was able to walk within 48 hours of surgery. Dr. Bhonsle is very optimistic that the patient will lead a normal life and will not require another revision in her lifetime.

“Having undergone 5 surgeries before, doctors abroad told me that a sixth correction could never be performed on my hip. I thought that I will have to lead a challenged life for the rest of the years. But like the saying goes every cloud has a silver lining! I too got hope after 12 years of suffering from Dr Bhonsle who took up the challenge and cured me. All I want to say is there is a solution to every problem, only thing is we need to hunt out for the opportunity and everything else falls in place”, says Nadia with a comforting smile on her face.