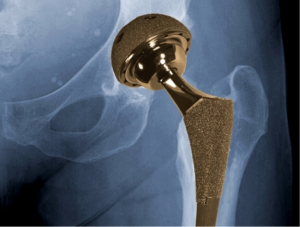 Patients with a common type of metal hip implant should have annual health checks for as long as they have the implant, according to the UK body for regulating medical devices. The all-metal devices have been found to wear down at an accelerated rate in some patients, potentially causing damage and deterioration in the bone and tissue around the hip. There are also concerns that they could leak traces of metal into the bloodstream, which the annual medical checks will monitor.

Hours before critical coverage from the British Medical Journal and the BBC, the Medicines and Healthcare products Regulatory Agency (MHRA) issued new guidelines on larger forms of ‘metal-on-metal’ (MoM) hip implants. Advice on smaller metal devices or those featuring a ceramic head has not changed. Previously, guidelines suggested larger MoM implants should only be checked annually for five years after surgery. The agency now says the annual check-ups should be continued for the life of the implant. Check-ups, they say, are a precautionary measure to reduce the “small risk” of complications and the need for further surgery.

Together with the recent controversy over PIP breast implants, the news has caused the media and patient groups to call for tighter regulation of medical devices, perhaps bringing the approval process into line with that of medicines. Before they can be approved for wider use drugs must undergo several years of laboratory, animal and human testing .

What types of implants are involved?

There are numerous designs and materials used to make hip implants. In recent days the MHRA has issued major updates to its advice on a type of metal-on-metal (MoM) hip replacement. As the name implies, MoM implants feature a joint made of two metal surfaces – a metal ‘ball’ that replaces the ball found at the top of the thigh bone (femur) and a metal ‘cup’ that acts like the socket found in the pelvis.

What should I do if I have a hip implant?

Consult your doctor if you do not know which type of implant you have or if you have any concerns about your hip replacement. The new guidance only applies to large head metal-on-metal implants, which have been used in only a minority of hip replacements. Patients who have MoM implants should ensure they attend any follow-up appointments as usual, and can consult the hip implant pages on NHS Choices for any further updates.

Consult your doctor if you have any of the following symptoms:

These symptoms do not necessarily mean that your device is failing, but they do need investigating.

Any changes in general health should also be reported, including:

The MHRA’s updated advice concerns the type of MoM implant in which the head of the femur is 36mm or greater. This is often referred to as a ‘large head’ implant. The agency now says that patients fitted with this type of implant should be monitored annually for the life of the implant, and that they should also have tests to measure levels of metal particles (ions) in their blood. Patients with these implants who have symptoms should also have MRI or ultrasound scans, and patients without symptoms should have a scan if their blood levels of metal ions are rising. The previous guidance on this type of hip implant, issued in April 2010, advised that patients should be monitored annually for no fewer than five years.

What about other types of hip implants?

Advice on monitoring patients with other types of hip implants remains the same, and guidance has not changed on:

How many people are affected?

It is estimated that, in total, 49,000 people in the UK have been given metal-on-metal implants with a width of 36mm or above. This represents a minority of the patients given hip replacements, who mostly have devices featuring plastic, ceramics or smaller metal heads.

What exactly is the problem with MoM implants?

All hip implants will wear down over time as the ball and cup slide against each other during walking and running. Although many people live the rest of their lives without needing their implant to be replaced, any implant may eventually need surgery to remove or replace its components. Surgery to remove or replace part of the implant is known as ‘revision’ and, of the 76,759 procedures performed in 2010, some 7,852 were revision surgeries.

However, data now suggest that large head MoM hip implants (those with a width of 36mm or greater) wear down at a faster rate than other types of implants. As friction acts upon their surfaces it can cause tiny metal particles (medically referred to as ‘debris’) to break off and enter the space around the implant. Individuals are thought to react differently to the presence of these metal particles, but, in some people, they can trigger inflammation and discomfort in the area around the implant. Over time this can cause damage and deterioration in the bone and tissue surrounding the implant and joint. This, in turn, may cause the implant to become loose and cause painful symptoms, meaning that further surgery is required.

News coverage has also focused on the MHRA’s recommendation to check for the presence of metal ions in the bloodstream, potentially released either from debris or the implant itself. Ions are electrically charged molecules. Levels of ions in the bloodstream, particularly of the cobalt and chromium used in the surface of the implants, may, therefore, indicate how much wear there is to the artificial hip.

There has been no definitive link between ions from MoM implants and illness, although there has been a small number of cases in which high levels of metal ions in the bloodstream have been associated with symptoms or illnesses elsewhere in the body, including effects on the heart, nervous system and thyroid gland.

The MHRA points out that most patients with MoM implants have well functioning hips and are thought to be at low risk of developing serious problems. However, a small number of patients with these hip implants develop soft tissue reactions to the debris associated with some MoM implants.

How are medical devices regulated?

In the UK, the MHRA is the government agency responsible for ensuring that medical devices work and are safe. The MHRA audits the performance of private sector organisations (called notified bodies) that assess and approve medical devices. Once a product is on the market and in use, the MHRA has a system for receiving reports of problems with these products, and will issue warnings if these problems are confirmed through their investigations. It also inspects companies that manufacture products to ensure they comply with regulations.

This system differs greatly from that for testing and approving drugs. Drugs require several years of research testing and trials before they can be approved for clinical use.

What action have regulators taken?

The MHRA has convened an expert advisory group to look at the problems associated with MoM implants. This meets regularly to assess new scientific evidence and reports from doctors and medical staff treating patients. The agency says it is continuing to monitor closely all the latest evidence about these devices and may issue further advice in the future.

In the US, the Food and Drug Administration (FDA) says it is gathering additional information about adverse events in patients with MoM implants. In the meantime, it advises patients with MoM hip implants who have no symptoms to attend follow-up appointments as normal with their surgeon. Patients who develop symptoms should see their surgeon promptly for further evaluation.

What actions have critics called for?

In light of the PIP breast implant controversy and this new information on hip implants, there is currently intense scrutiny on the way medical devices are regulated in the UK and Europe, with patient groups and the media arguing that medical devices should be regulated in a similar way to medicines.

Clearing a medicine for use in the UK is a lengthy process involving several stages of laboratory and animal testing, and then carefully controlled and monitored tests in humans. Only once there is enough evidence to suggest that a medicine is reasonably safe can it enter clinical use, and even then patients will be monitored to look at the longer-term effects of the drug.

However, medical devices are not required to go through human trials before entering use, and can currently be approved on the basis of mechanical tests and animal research. While certain devices, such as hip implants, have been monitored through systems such as the National Joint Registry, in light of the recent health concerns over PIP breast implants, patient groups are calling for more testing before devices are allowed into clinical use, and closer mandatory monitoring schemes to ensure their safety once they enter the market.