J&J Hip Replacement Lawsuits Given to One Judge 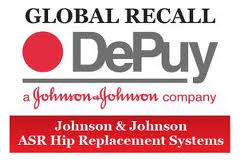 Dec. 4 (Bloomberg) — All pretrial proceedings in federal lawsuits against Johnson & Johnson over recalled devices used in hip-replacement surgery will be overseen by a federal judge in Ohio, a judicial panel decided.

Such consolidation “will serve the convenience of the parties and witnesses and promote the just and efficient conduct of the litigation,” according to the Judicial Panel on Multidistrict Litigation. About 150 federal lawsuits are pending, and plaintiff’s lawyer Steven T. Baron of Baron & Budd in Dallas said he represents “hundreds of claimants” with defective hips.

“I’m highly confident there will be thousands of lawsuits,” Baron said in an interview. “I think this is a very significant liability for Johnson & Johnson. I believe that the damages that they’ve caused are in the billions of dollars.”

DePuy recalled both the ASR XL Acetabular System, a total hip-replacement product approved by U.S. Food and Drug Administration in August 2005, and the DePuy ASR Hip Resurfacing System, which wasn’t used in the U.S. A total of 93,000 were implanted, including 37,000 in the U.S., according to spokeswoman Lorie Gawreluk.

“DePuy looks forward to working with Judge Katz and counsel for plaintiffs to address the issues raised by this litigation,” Gawreluk said in an e-mail. “DePuy remains committed to covering reasonable and customary costs of testing and treatment for patients who need services, including revision surgery if it is necessary, associated with the ASR recall.”

Researchers in the U.K. found recently that after five years, 13 percent of patients with complete hip replacements and 12 percent with resurfacing devices needed a second operation, known as a revision, J&J officials said in a statement announcing the recall.

Other medical-device makers have faced costly product- liability cases in the past over hip-replacement systems.

Sulzer AG agreed in 2001 to a $1 billion settlement of suits alleging hip and knee implants made by its former Sulzer Medica unit were defective. Sulzer, the world’s second-largest maker of pumps, is based in Winterthur, Switzerland.

The seven-judge MDL panel, created in 1968, decides whether lawsuits in different federal courts have common factual questions that would benefit from consolidation. The process is designed to streamline the exchange of evidence and avoid duplication. Once pretrial proceedings are completed, the individual cases are sent back for trial in the courts where they were first filed.

To contact the reporters on this story: David Voreacos in Newark, New Jersey, at dvoreacos@bloomberg.net; Jef Feeley in Wilmington, Delaware, at jfeeley@bloomberg.net.

To contact the editors responsible for this story: David E. Rovella at drovella@bloomberg.net.