In August 2010, DePuy Orthopaedics issued a voluntary recall of its ASR XL Acetabular Hip System and DePuy ASR Hip Resurfacing System. Find information about possible symptoms, testing, treatment, and DePuy’s commitment to addressing reasonable and customary costs related to the recall. The DePuy Orthopaedics ASR Hip System first became available in July 2003. If you had your hip surgery prior to July 2003, the hip you received is not subject to this recall. Call the ASR help line 1800 665 460 (toll free). The Call Centre will be active from 8.30 am-5.00 pm, Monday to Friday.     www.depuy.com/aupatient

Four Corners Letter to SportsMed Reporter Quentin McDermott wrote a letter to SportsMed inviting them to respond to questions regarding some of their patients who received the DePuy hip implant. [PDF 60Kb] Read theResponse from from SportsMed. [PDF]

Expert Advisory Group report: soft tissue reactions associated with MoM hip replacements | MHRA UK | October 2010 An Expert Advisory Group (EAG) involving members of the British Hip Society (BHS), the British Orthopaedic Association (BOA), the Medicines and Healthcare products Regulatory Agency (MHRA), and the National Joint Registry of England and Wales (NJR) was set up to: determine the incidence of this problem; and advise clinicians on any modifications to current practice which may be necessary to minimise the risk of this adverse reaction and optimise early detection. Download the report.

Editorial: Metal on Metal: Is It Worth the Risk? | The Journal of Arthroplasty Vol. 25 No. 1 | 2010 There has been an explosion in the use of metal?on?metal bearings in the last 5 years throughout the world. This has mostly been driven by the use of metal bearings in resurfacing, although metal heads have also been used in conjunction with primary total hip arthroplasties. The move to metal heads has primarily been driven by a desire to use larger articulations to reduce dislocations, although smaller metal head combinations are also available and are used clinically. The questions to be addressed in this editorial are firstly to ask if metal bearings do confer a clinical advantage and secondly to look at the potential downside with the use of metal heads. Authors: Ross Crawford, DPhil, Chitranjan S. Ranawat, MD, Richard H. Rothman, MD, PhD. [PDF 96.73Kb]

Metal Sensitivity in Patients with Orthopaedic Implants | The Journal of Bone and Joint Surgery (2001) All metals in contact with biological systems undergo corrosion. This electrochemical process leads to the formation of metal ions, which may activate the immune system by forming complexes with endogenous proteins. Authors: Nadim Hallab, PhD, Katharine Merritt, PhD and Joshua J. Jacobs, MD.

Patients reveal agony of toxic hip implants | ABC News | 16 May 2011 A medical scandal that has resulted in hundreds of patients being poisoned and seriously disabled may soon lead to changes in the way medical devices are approved for use in Australia. By Quentin McDermott and Karen Michelmore.

Hip Makers Told to Study More Data | New York Times | 10 May 2011 In an unusual move, the Food and Drug Administration has ordered all producers of a popular category of artificial hip to undertake studies of the implants, which have been linked to high early failure rates and severe health effects in some patients. Under the order, producers of “metal-on-metal” hips will have to conduct studies of patients who received the device to determine, among other things, whether the implants are shedding high levels of metallic debris. Some patients have encountered that problem, including soft tissue damage that has disabled them.

Hip surgery ruins lives | SMH | 13 March 2011 Jacqueline Gray enjoyed dancing, had a passion for surf lifesaving and did her own shopping. Now the 53-year-old, who lives near the beach on the NSW mid-north coast, has lost her hair, is unable to walk without help and lives in excruciating pain… Mrs Gray, who has joined the class action, is unable to get around without help despite numerous surgical procedures. She takes painkillers daily and has lost her hair due to the level of chromium in her body.

With Warning, a Hip Device Is Withdrawn | New York Times | 9 March 2010 A unit of Johnson & Johnson, just months after saying it was phasing out an artificial hip implant because of slowing sales, has warned doctors that the device appears to have a high early failure rate in some patients. The action by the company, DePuy Orthopaedics, follows more than two years of reports that the hip implant, which is known as the ASR, was failing in patients only a few years after implant, requiring costly and painful replacement operations.

Concerns Over ‘Metal on Metal’ Hip Implants | New York Times | 3 March 2010 Some of the nation’s leading orthopedic surgeons have reduced or stopped use of a popular category of artificial hips amid concerns that the devices are causing severe tissue and bone damage in some patients, often requiring replacement surgery within a year or two. In recent years, such devices, known as “metal on metal” implants, have been used in about one-third of the approximately 250,000 hip replacements performed annually in this country. They are used in conventional hip replacements and in a popular alternative procedure known as resurfacing.

Tasmanian leads hip class action | ABC News | 28 February 2011 A Tasmanian woman is leading a class action against a UK producer of faulty hip implants. Two DePuy International Limited implants have been found to cause painful soft tissue damage, which reduces the likelihood of a successful second replacement. 5,000 Australians had the DePuy ASR prosthetic hips implanted between 2003 and 2009.

Australian joins US class action over hip implant | ABC News | 16 September 2010 A Brisbane grandfather joins US legal action against pharmaceutical giant Johnson and Johnson after receiving what his doctor says is a faulty hip replacement. Video. 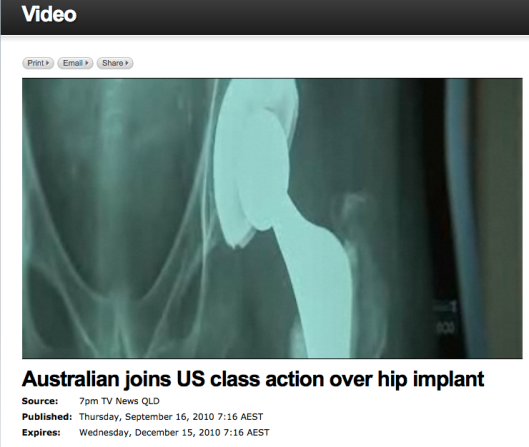 Artificial knee gone wrong | ABC Health Report | 4 October 2010 An Australian doctor had his knee replaced in 2007 and has had many problems with the replacement since. He found out later that the device used, a DePuy duofix knee femoral component, has been recalled by the company. Apparently a proportion of the devices allow alumina particles to enter the joint, act like carborundum, and invade the joint lining causing inflammation. Transcript.

Hip replacement device withdrawn | ABC Health Report | 30 August 2010 A major manufacturer of medical devices, a company called DePuy, announced the withdrawal from the marked of one of their hip replacement (or prothesis) systems, called the ASR. Read program transcript.

Johnson & Johnson Recalls Hip Implants | New York Times | 26 August 2010 More than two years after the Food and Drug Administration began receiving complaints about the failure of a hip replacement implant made by the DePuy Orthopaedics unit of Johnson & Johnson, the company said Thursday that it was recalling two kinds of hip implants.

Hip and knee replacement surgery | ABC Health Report | 16 October 2006 A Canadian study looked at the predictors of undergoing joint replacement surgery among patients with severe osteoarthritis. And a report from the National Joint Replacement Registry in Australia claims that new artificial joints which have been approved over recent years have not been delivering value for money. Transcript.

The Quality of Artificial Hips and Knees | ABC Health Report | 21 Nov 2005 Tens of thousands of people have hip and knee replacements every year – and they’re getting younger and younger. But how do you know that the artificial joint the surgeon wants to use in you is up to the job? An Australian survey has found several which aren’t and the result is unnecessary repeat operations which cost millions each year, and delayed operations due to long waiting lists. Read more.

Joined at the Hip Club – Hip Replacement, a personal experience | ABC Health Report | 3 November 2003 In Australia around 30,000 people have hip replacements every year. Documentary film maker Aviva Ziegler is one of them. In this program Aviva takes us on her own personal hip replacement journey. Documented over a period of more than 6 months, she shares her experiences. We learn about her pain, not only in her hip, but in her decision to do something about it. Aviva takes us along before, during and after surgery. Read transcript.

Medical Device Alert | Medicines and Healthcare products Regulatory Agency UK | 22 April 2010 The MHRA has received reports of revisions of MoM hip replacements involving soft tissue reactions… The majority of patients implanted with MoM hip replacements have well functioning hips and are thought to be at a low risk of developing serious problems. A small number of patients implanted with these hips may, however, develop progressive soft tissue reactions to the wear debris associated with MoM articulations. The debris can cause soft tissue necrosis and adversely affect the results of revision surgery. Early revision of poorly performing MoM hip replacements should give a better revision outcome. Read more. [PDF 87Kb]

FDA’s Medical Device Review Scrutinized at Senate Hearing | US Senate Hearings | 13 April 2011 Internal reviews by FDA officials and other outside sources have found troubling lapses in the procedures by which a number of medical devices were approved… The hearing highlighted the story of Ms. Katie Korgaokar, a Denver resident who received a DePuy ASR hip implant to treat a congenital condition called Perthes disease. In 2010, the DePuy hip was recalled and Korgaokar endured a second hip-replacement surgery in early 2011. Korgaokar was one of 96,000 patients affected by the DePuy hip recall. Read more.

Bone & Joint Decade (Australia) The Bone and Joint Decade 2000 – 2010 was initiated by the United Nations and the World Health Organisation to improve the health-related quality of life for people with musculoskeletal disorders. www.bjd.org.au/