One of Warsaw’s Big Three is getting a little bit bigger. 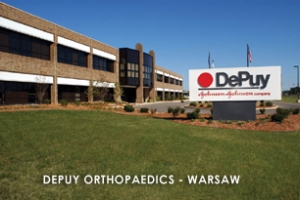 DePuy Orthopaedics Inc. plans to invest $27 million in manufacturing and research equipment at its Warsaw operations, according to an abatement request filed with the city of Warsaw.

The orthopedic devices maker, which employs 1,150, doesn’t expect to add jobs as part of the project, according to the filing.

Warsaw officials this week approved the request, giving the company a 10-year break on taxes assessed on the machinery. The equipment is scheduled to be installed sometime before 2014.

The investment will be divided between manufacturing equipment, $20 million, and research and development equipment, $7 million.

Jessica Masuga, DePuy spokeswoman, wrote in an email that the equipment “will add important new state-of-the art capabilities and increase efficiency at the Warsaw facility.” She declined to comment further.

The planned spending spree is only one of several changes for the international company.

Ekdahl’s career with the company spans more than 20 years with responsibility for operations on multiple continents.

The average annual wage for the county’s medical device workers was more than $70,000, which is more than $11,000 greater than the state average and $12,000 above the national average.

When companies invest in equipment, they are continuing to remain state-of-the-art, he said. When they invest in research and development, the company is creating new and better products, he said.

“There was never a question” whether Warsaw officials would approve the abatement request, said Robertson, who didn’t work with DePuy on this project. “Those are great investments by a great company.”