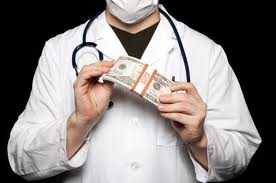 NEW YORK — The U.S. government is turning the spotlight on doctors in a long-running investigation into suspected kickback payments to hip and knee surgeons made by the orthopedic device industry.

Having reached settlements with the five leading makers of artificial joints last year over the payments, the government has been focusing on the many doctors who receive money as the companies’ paid consultants.

“We are going to be looking at those soliciting kickbacks,” Lewis Morris, the chief counsel in the U.S. office that pursues civil complaints of Medicare fraud, told an audience of hundreds of doctors, company representatives and investors this month in San Francisco at the annual meeting of the American Academy of Orthopedic Surgeons.

The same message has gone out to health care lawyers attending legal education seminars in recent months and, directly from Christopher Christie Jr., the Justice Department‘s U.S. attorney in Newark, New Jersey, who is overseeing the investigation. Executives say Christie has addressed sales meetings of the five companies, which reached a settlement last fall to avoid prosecution on charges they had routinely paid illegal kickbacks to surgeons.

Christie said, ” ‘I’ve dealt with the supply issue, now I need to deal with the demand issue,’ ” recalled Edward Lipes, the executive vice president in charge of surgeon relationships at the device maker Stryker, the first of the companies to cooperate in the investigation, which began in 2005.

The government has not argued that any of the kickbacks led to unnecessary knee or hip surgery or maltreatment of any patients. Nor has it established a direct link to higher Medicare costs. Switching a patient from one company’s device to another would not change the amount Medicare pays hospitals for an implant.

But kickbacks might raise the overall cost of health care. Doctors can be convicted of violating Medicare’s anti-fraud statutes simply for submitting a bill for a procedure linked to a kickback, whether or not the procedure was necessary.

Besides Stryker, the original targets of the investigation were Biomet; DePuy Orthopaedics, a unit of the Johnson & Johnson; Smith & Nephew; and Zimmer Holdings. Those four agreed to pay $310 million in fines to settle civil charges.

In December, two smaller competitors, the Wright Medical Group and Exactech, received subpoenas, indicating that the government is intent on making sure that the entire major joint business – the $6 billion core of the orthopedics industry – is playing on the same field.

From the government’s perspective, the investigation has already been successful. Even before the settlements with the device makers, those companies and others had sharply curbed entertainment, travel payments and other practices the government regarded as possibly influencing doctor’s medical decisions. And with the settlements, still tighter restrictions were forced on the companies.

To avoid prosecutions that could have threatened the companies’ Medicare business – a crushing blow in a segment of the health care industry where the average patient is 68 years old – the device makers not only agreed to pay the fines but to operate for 18 months under stricter U.S. scrutiny than military contractors do.

For all the disclosures and scrutiny though, the details of the misconduct that attracted the Justice Department’s attention remain murky.

The companies were allowed to deny any wrongdoing in the criminal and civil settlements they negotiated. The four that signed so-called delayed prosecution agreements – Biomet, DePuy, Smith & Nephew and Zimmer – have been promised that the criminal cases filed against them in September would be dropped a year from now if they live up to compliance procedures in their agreements.

No charges were filed against Stryker, the fifth company, because it was the first to cooperate in the investigation. But Stryker accepted the same restrictions on its conduct and was also assigned an independent monitor for 18 months. Stryker’s potential civil liabilities were left unresolved.

The five companies’ payment disclosure lists say nothing about what the doctors on them did to receive their money.

As a result, there is no apparent way to distinguish potentially questionable kickback deals amid a sea of service contracts, licensing agreements and research grants that the government agrees are legitimate.

The American Academy of Orthopedic Surgeons has said that the listings raised unfair suspicions and that the companies should provide more detailed breakdowns of the payments.

“A lot of this has been irresponsible,” Dr. Thomas Coon, a surgeon in Red Bluff, California, said of the government’s investigation during a break at the recent meeting in San Francisco.

Coon said the broad reach of the government’s action had “thrown up in the air” hundreds of company-surgeon relationships. “Who knows how it will come out?” said Coon, a pioneer in minimally invasive knee surgery, who has consulted principally for Zimmer, the largest hip and knee company.

As indicated by Coon’s work with Zimmer, financial relationships between orthopedics companies and their customers are among the most complicated in health care. In contrast to drugs, which are typically developed in company laboratories, many orthopedic devices and related tools originate from inventions by doctors, who often retain a financial stake in their market success.

Once companies begin to develop the devices, leading doctors are hired as consultants to help modify the implants and related hardware.

When the products are finally brought to market, companies also hire many of the same opinion leaders to train other doctors and sales representatives how to use them.

As a result, Christie has had no problem finding large sums of money – in some cases, more than $1 million annually – flowing from companies to doctors who use their devices. But doctors say it is far too simplistic to conclude, as Christie claimed last fall, that “many orthopedic surgeons in this country made decisions predicated on how much money they could make – choosing which device to implant by going to the highest bidder.”

For the most part, the hip and knee joints sold by the major companies are similar in performance, but getting surgeons to switch is a lot more difficult than persuading an internist to prescribe a prescription drug rather than aspirin.

Familiarity with a joint and the tools to put it in place may be the single biggest factor in a surgeon’s success with a patient, according to Dr. Ronald Grelsamer, a Brooklyn orthopedist and author of books on hip and knee reconstruction.

“Surgeons are by and large reluctant to jump from one horse to another,” Grelsamer said.

As a result, surgeons would be looking to whatever cases might be brought against their peers to clarify the lines the government wants drawn between unacceptable and acceptable relationships with the device industry.