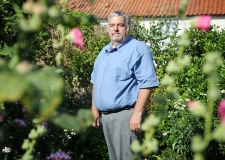 A man who has been hit by health problems from a controversial ‘metal-on-metal’ hip replacement is taking legal action against the manufacturer.

Since 2002, more than 10,000 patients in the UK were fitted with a hip replacement device called the ASR which uses metal as a replacement for the joint. But components used within the artificial joint were causing build up of fluid around the joint and blood poisoning – with many patients left in excruciating pain and some facing longer-term problems with their movement and further surgery.

Among the patients who have experienced problems is Chris Monk, from Cawston, near Alysham, who had to undergo revision surgery on July 9, 2011, after originally being treated with a metal-on-metal implant.

At the time of the surgery, the 63-year-old was working on a fixed-term contract for maternity cover.

Unfortunately, this was not renewed and given the problems he had had with his hip replacement and the length of time he has been off work, the finance manager has struggled to find work and is currently unemployed.

The grandfather-of-two said: “It started to feel a little bit clunky and was grinding and then it started to squeak very loudly, loud enough for people in the street to be startled and stare at me.”

Subsequent scans showed damage to his flesh and signs of metallosis, where there is a build up of metallic debris in the body.

Manufacturer DePuy International paid for him to have the device removed and replaced as a private patient at the Norwich and Norfolk University Hospital.

Mr Monk, who lives in the village’s High Street, said: “I was in so much pain and could barely walk a few yards when it was at its worst. I’m concerned about the future and I would say it has definitely affected my employment prospects.”

Gary Walker, a product liability solicitor at Irwin Mitchell, is representing Mr Monk and over 100 patients affected, but says some hospitals have only recalled people in the past couple of months and there may still be some patients who are not aware that the implant they have received may be failing. Irwin Mitchell is now taking legal action against De Puy.

DePuy said its efforts to support ASR patients and their surgeons remain a top priority. A spokesman said: “Metal-on-metal wear can result in the release of ions that can be measured through medical tests. These particles have not caused problems for most patients, but a small number of patients have been reported to have an adverse reaction to them.”