The government is denying 200,000 people the safety of a new anti-coagulant – because it will cost $1 billion over 4 years – so the Government will give away $900 per tax payer in one hit when the GFC hit; but it wont spend $1,250 per person to save lives…

They would rather we keep taking a costly and hard to manage Wafarin (rat poison).

Actually it is less because you can take off the cost of the Warafarin it replaces and the countless blood tests and the other complications that arise from poorly controlled blood clotting.

Jury still out on new drug for strokes 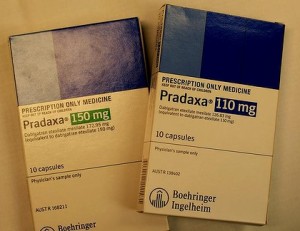 THE Gillard government has reversed its delayed listing of new drugs but sparked fresh controversy over the deferral of an advanced treatment for more than 200,000 people at high risk of stroke.

The drug Pradaxa has received expert backing as an alternative to the unpopular blood thinner warfarin, which many doctors and patients avoid because of haemorrhage risk and complex care needs.

Experts have advised the new drug is safe and cost-effective. But the government, concerned at Pradaxa’s estimated cost of up to $1 billion over four years, has deferred listing and ordered an unprecedented review of anticoagulation therapies.

The Prime Minister, Julia Gillard, announced yesterday the listing on the Pharmaceutical Benefits Scheme of 15 new medicines. Listing of six of the expert-recommended drugs was deferred in February for budgetary reasons, creating outcry from doctors and patient groups.

Ms Gillard said that more than 160,000 patients a year would benefit from the listing of the drugs which include new treatments for heart failure in children, cancer and tuberculosis.

The Pradaxa deferral comes after the expert Pharmaceutical Benefits Advisory Committee in February recommended its listing, saying that patients were reluctant to take warfarin because of the stringent monitoring, including blood tests and dietary restrictions, required.

Both drugs are used for the treatment of atrial fibrillation – an irregular heartbeat condition commonly experienced by elderly people that nearly doubles their mortality risk compared with other stroke patients.

The anticoagulants thin the blood to help prevent blood clots, which can trigger strokes, but increase the risk of uncontrolled bleeds.

The deferral has drawn criticism and support from medical experts who say there are complexities in treatment whether with Pradaxa or warfarin, both of which increase the risk of haemorrhages.

John Amerena, who helped oversee a global trial of Pradaxa involving 18,000 patients which found it to be 35 per cent more effective than warfarin, said the decision was disappointing given the obvious advantages of the new drug.

Associate Professor John Worthington, of the University of NSW and the Ingham Institute, said as many as 90 per cent of patients with atrial fibrillation-related stroke did not receive appropriate blood thinning medication at the time of their stroke.