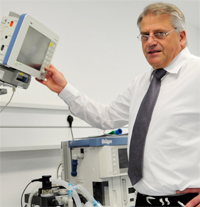 TWO widows in need of vital surgery will get the treatment they need thanks to a Bahrain hospital’s goodwill gesture this Ramadan.

The German Orthopaedic Hospital (GOH) will be providing the surgical skills needed in a partnership initiative with Bahrain Airport Services (BAS) in support of the Royal Charity Organisation (RCO).

This month two surgeries are to be performed, one involving a total knee replacement and the other to cure severe shoulder joint inflammation.

The patients will be exempt from all financial obligations, including the operation, hospital stay at GOH, medicine, reviews process and post-physiotherapies.  The surgeons and medical staff members will be donating their time and expertise free of charge.

Professor Dr Heinz Roettinger, a senior orthopaedic consultant, and managing director of the medical and administrative staff at the hospital, said: “I am happy to donate my time to help the poor people in need.

“Obviously, we are also dependent on attracting sponsors. The more people who come forward with donations, the more operations we can carry out. In years to come, hopefully we can increase the number to 10 or 15 operations. Perhaps this initiative will grow every year.”

Dr Roettinger is a musculoskeletal surgeon renowned for his developments in minimally invasive hip and knee joint surgeries. He had approached the RCO as part of the hospital’s corporate social responsibility (CSR) policy.

He said: “Coming from Europe we want to become involved within the Bahraini community. Ramadan especially is a time for giving. This should be an annual event.

“We try to provide the highest level of medical care in a state-of-the-art private hospital. We know there are a lot of people that can’t pay for the treatments but I don’t want the door closed for sick people just because they may not be able to pay.”

Dr Roettinger added: “In fact, last year I paid for one of the five operations myself and another was funded by donations made by doctors at the hospital.

“BAS came forward to sponsor one of the patients as part of its own Ramadan initiative. The company also asked its 2,400 employees to make donations to help fund the second patient’s treatment.

“Just try and imagine what it would be like if other companies in the kingdom followed suit?” said Dr Roettinger. “If, say a company of 3,000 asked their employees to donate just one dinar each they would be able to pay for a shoulder arthroscopy. A knee replacement would run you a bill of between BD6,000-BD7,000 depending on the individual’s case.

“With more sponsors, more operations could be done. This is a great vision and an easy thing to do.”

Salman Al Mahmeed, deputy chief executive officer of BAS, said: “In the true spirit of giving during the Holy Month, we have contributed to this wonderful Ramadan gift of makng world-class medical care available to those in need.

“BAS has always had a strong connection with the community and outreach programmes such as these really do change lives for the better. This initiative, spearheaded by the GOH in partnership with the RCO, shows that private companies have a social responsibility to the community that we all live in.

“BAS’s own CSR programme welcomes initiatives such as these and wholly supports the continuous contributions made by the surgeons to provide the less fortunate with advantages and specialist care that some people sometimes take for granted.”