Which Tiger Woods will show for World Golf Championships 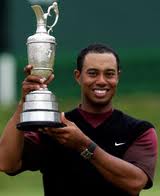 When Tiger Woods captured his 10th major before his 30th birthday at the 2005 British Open, the idea of him surpassing Jack Nicklaus‘ record of 18 seemed a question of if, not when.

Even in early June 2009, when Woods had totaled 14 and was returning from reconstructive knee surgery, Nicklaus thought Woods would break his mark within three years. Nicklaus did say winning five more after age 33 would be tough for anyone else, but he virtually conceded his cherished mark to Woods because of his extraordinary focus and work ethic.

That was before a car accident on Thanksgiving night 2009, when Woods’ seemingly perfect life came crashing down. A sex scandal ended his marriage. Four surgeries on his left knee and an Achilles problem, along with another swing change, have stalled his career. He turns 36 on Dec. 30 and hasn’t won a tournament since November 2009.

Going into this week’s $8.5 million World Golf Championships-Bridgestone Invitational at Firestone Country Club, Woods has played in only six events this year, missing more than two months to recover from his latest leg ailment. In 2010 on the South Course where he has prevailed seven times, Woods tied for 78th in a field of 80.

Woods said Tuesday upon his return to the PGA Tour that he is the healthiest he has been in years, but doubt has surfaced.

Nicklaus’ record of 18 majors is beginning to look more like Joe DiMaggio’s 56-game hitting streak or Affirmed’s 1978 Triple Crown. What once seemed like a tap-in appears more unattainable every day, for Woods or anyone else.

At least to those on the outside.

Some of Woods’ peers who were interviewed in June at the AT&T National at Aronimink Golf Club in Newton Square, Pa., were not so quick to dismiss Woods’ chances.

“I wouldn’t give up on Tiger just yet. No way,” said Australian Adam Scott, whose temporary hiring of Woods’ caddie Steve Williams led to a Woods-Williams split. “I’ve never counted that man out of anything. He proves everyone wrong all the time.

“He’s four away from equaling it. I think that’s attainable for him at 35 years old. He’s well on track. If he were 45, I’d be worried. I think he’s got a great chance.”

So does Australia’s Stuart Appleby, who will be playing at Firestone for the 13th year.

“It’s a delay. I wouldn’t call it by no means over,” Appleby said. “The next five years are critical.

To no one’s surprise, Woods scoffed at the notion that his chase of Nicklaus is over.

“Absolutely not,” Woods said at his news conference at the AT&T National, which benefits his foundation. “(Nicklaus) won when he was 46, right? I’ve still got some time. And on top of that, we’re about the same pace, I believe, years on tour and majors won. So I feel pretty confident of what my future holds and very excited about it.”

Woods also looked at Tom Watson’s second-place finish at the 2009 British Open at age 59 as evidence that he might be able to compete longer than expected. Watson was coming off hip replacement surgery when he lost a playoff to Stewart Cink at Turnberry.

“I’m 35, I’m not 65,” Woods said at the AT&T National. “I’ve still got some years ahead of me. Golf is unlike any other sport. I mean, Watson was, what, 59 years old when he almost won? We can play for a very long time. And given that we have the health to do it, guys have succeeded for a very long time. I feel like my best years are still ahead of me working with (swing coach) Sean (Foley) and some of the things that we’re trying to do.”

Before the British Open at Royal St. George’s, Watson expressed skepticism about Woods’ career with a bad knee, especially if he eventually needs it replaced. Woods said at Aronimink that knee replacement has never been discussed.

“With a hip, you put a new one in and here we go,” Watson said, according to the Daily Mail. “The knee takes a lot more stress. It’s out there on its lonesome and rotates. Whether he is going to have a total knee replacement, who knows, but that may be a more difficult thing to come back from if he does.”

At the AT&T National, Jim Furyk faulted those who rushed to judgment about Woods breaking Nicklaus’ record. Woods reached No. 8 when he was 26 at the 2002 U.S. Open at Bethpage Black.

“Everyone rushes to put the cart before the horse. Because you get to eight quickly doesn’t mean 18 looks so easy,” Furyk said. “It would be my guess that the last four for Tiger will be the hardest, whether he’s healthy or not, just because as you’re closing in it gets more difficult.

“Three years ago it looked very attainable. But now not knowing exactly how healthy he’s going to be or where he is and what’s in his heart as far as chasing it, I’d be making a guess or an assumption. It looks tougher now. I wouldn’t say it’s not attainable.”

D.A. Points, a 34-year-old Nationwide Tour product who earned a trip to Firestone by winning this year’s AT&T National Pro-Am at Pebble Beach, believes longevity could be less of an issue than when Nicklaus was winning majors from 1962-86.

“Now these days guys are more fit, more aware, take care of themselves, maybe don’t play as much as guys used to play,” Points said at Aronimink. “Longevity may be easier now than maybe it was back when Mr. Nicklaus was playing.”

So Points wouldn’t give up on Woods or a youngster like Northern Ireland’s Rory McIlroy, who won the 2011 U.S. Open at age 22.

“I’m not going to say it’s never unattainable,” Points said. “Tiger’s still got a lot of good years ahead of him. I don’t think it’s that far out of reach.”

This year Woods came close to adding to his total, tying for fourth at the Masters. But he missed two majors for only the second time in his career, joining 2008, when he sat out the British Open and PGA. The PGA Championship is next week at Atlanta Athletic Club.

“I’d say right now the odds of him breaking Jack’s 18 majors is 1 in 3 or 4,” NBC analyst Johnny Miller said on a episode of the Golf Channel’s Feherty last month.

At the Memorial Tournament he founded, Nicklaus admitted that he didn’t want Woods to pass him.

“Nobody ever wants records to be broken,” Nicklaus said. “That’s obvious. I don’t care who it is. I told Tiger when I was on the phone with him, ‘I certainly don’t want you not to be healthy and not have the opportunity to break records. I want you to get yourself healthy, get your golf game back in shape and I wish you well.”‘

Some members of the PGA Tour are just as interested as Nicklaus to see what happens. Stow resident Ben Curtis, the 2003 British Open champion, wonders if Woods pushed himself to play through injuries so he could get to 19 majors and retire.

“It’s going to get tougher for him now,” Curtis said. “It still can be done. If he stays in shape, gets his knee healthy, I’m sure he can play until he’s 60. He might have 20 more years. Who knows? It would be cool to see someone you played against have a chance to break it.”

California-born Nick Watney, the tour’s leading money-winner, lauded 18 majors as “an amazing record, to be sure.”

“Tiger, for a while there he was on such an amazing pace that it was almost a given,” Watney said at the AT&T National. “Now it will be interesting to see if he does it. I wouldn’t count him out.”

4 thoughts on “A Knee’s Up – or Not? Which Tiger Woods will show for World Golf Championships”