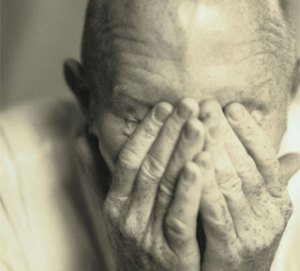 Millions of arthritis sufferers are battling depression because of the pain of their condition, says a new survey.

It shows three out of five people with arthritis are brought low by chronic pain, with women worst affected.

Half of young people in their 20s and 30s report that arthritis-related pain stops them going out socially and leading a normal life.

The survey by leading charity Arthritis Care shows the emotional impact of living with long-term pain is being neglected by doctors, with patients getting no advice on how they can help themselves.

This leads to a rising burden on the NHS, it says, as 10 million Britons live with some form of arthritis, mainly rheumatoid arthritis and osteoarthritis.

The condition accounts for one-third of visits to the GP, and the economic burden to the UK is £7 billion each year.

The survey found 68 per cent of 2,263 sufferers feel depressed when their pain is at its worst.  Four out of five feel tired and half feel weak and helpless.

More women than men said when their arthritis pain was bad they felt depressed – two-thirds compared with half of men – and women were more likely to feel alone or scared.

Women and young people aged 34 and under were most likely to be forced into staying at home rather than having a social life, with up to two-thirds leading reclusive lives.

Three out of four people with arthritis say the pain prevents them sleeping through the night, and one-third say it stops them having an intimate relationship.

But even people close to sufferers don’t understand the level of pain, say eight out of ten surveyed.

Information on how to deal with the pain was best provided by specialist doctors, according to almost half of sufferers, and by GPs for two in five.

Yet medication coupled with self-management programmes can ‘substantially lessen’ the severity of depression and improve pain and disability, says Arthritis Care.

‘Depression is an overlooked effect of arthritis pain and people must be supported to cope with the emotional impact of living with arthritis.

‘Arthritis is a painful and debilitating condition which can also leave people feeling anxious, tired and vulnerable.

‘While it is clear that more research is needed to further establish a link between the different types of arthritis – of which there are more than 200 – and depression, early treatment is key.

‘Arthritis Care is calling on health professionals to recognise the emotional impact arthritis can have on people and to recommend self-management so that they can start to take control of their lives.’