A DePuy marketing executive, Randall Kilburn, testified today in California state court at the first of 10,000 lawsuits to go to trial over the ASR hips, which J&J withdrew in August 2010 when their failure rate reached 12 percent. Kilburn was asked about a meeting in July 2007 in Chicago, where the marketing team discussed several hip devices.

At that meeting, the sales force saw a PowerPoint presentation titled: “What scares us the most in the year ahead?” Of the nine items listed, the first was: “Metal ion backlash.” Others included industry consolidation, price pressure and Japan.

Jurors are weighing the lawsuit of Loren Kransky, 65, who claims the ASR hip was defectively designed and the company failed to warn of risks. Kransky’s lawsuit and many others claim that the shallow design of the hip cup, in which a metal ball sitting atop the femur rotates, led to the shedding of metal ions in surrounding tissue and bloodstream.

J&J, the world’s largest seller of health-care products, denies it designed the ASR defectively or that it led to dangerous levels of metal ions. J&J, based in New Brunswick, New Jersey, says it properly warned of the risks. Analysts say the lawsuits could cost the company billions of dollars to resolve.

“Yes, it’s one of many threats,” Kilburn said. 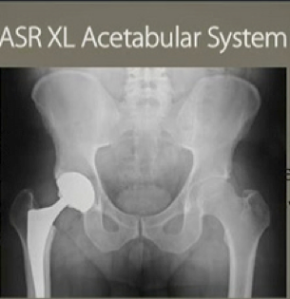 Panish asked Kilburn about complaints from surgeons who claimed the ASR was failing. In 2008, DePuy also weighed a redesign of the ASR cup, which is slightly less than a half- circle, and included a groove to help a surgeon place the device in the hip. Kransky’s lawyers and experts say that design led to metal ions entering the bloodstream.

“When it was malpositioned, yes,” Kilburn said.

“That would be a red flag, wouldn’t it?” Panish asked.

“Yes, when it was malpositioned,” the witness said.

Jurors saw a video of a 2008 sales meeting in New Orleans where Kilburn announced that the ASR hip division had increased sales in 2007 by $62 million over the previous year. At one point he said to the audience, “Game on!”

“This was after you had received many pieces of information raising red flags?,” Panish asked. Kilburn agreed.

“You were still out there – game on – selling as much as you could,” Panish said. Kilburn agreed.

That device advanced metal-on-metal designs of the 1960s and 1970s that had fallen out of favor as metal-on-polyethylene grew popular. DePuy began selling a similar device, the ASR Hip Resurfacing System, outside the U.S. in 2003. Both devices used an alloy of cobalt and chromium.

DePuy engineer Graham Isaac wrote in an e-mail that McMinn gave a speech to the British Hip Society and attacked competitors, while “his main vitriol was reserved for ASR.” McMinn, Isaac wrote, “implied that the testing of ASR was both incompetent and biased.”

Isaac said that the lead surgeon designer of the ASR, Thomas Schmalzried, “was almost shaking with rage.”

“We should be flattered as we are obviously seen as the main threat,” Isaac wrote.

“Good to know the Society generally didn’t give credence to what McMinn was saying,” Berman wrote. “It certainly is baffling that they continue to give him air time. I suppose it is somewhat like Brittany Spears…nobody really respects her, but there is a lot of morbid curiosity,” an apparent reference to pop singer Britney Spears. “I am confident that McMinn will continue to dig his own grave here in the U.S.,” Berman wrote.

Berman wrote to Schmalzried that he got 10 calls after “McMinn’s little performance at Hip Society.”

“We now have some surgeons asking what is wrong with ASR,” he wrote. “While McMinn may not have come across as credible, some surgeons certainly listened to him. A position statement will really help our sales force deflect the mess he created.”

Schmalzried wrote that the ASR board preferred to avoid publicly rebutting McMinn.

Jurors saw an Isaac e-mail from April 30, 2008. He said clinical data comparing the ASR and BHR showed the DePuy device in some conditions was subject to “extreme metal ion levels.”

After the data appeared in medical journals, it had “the potential to seriously affect our business,” Isaac wrote.

“We need to discuss this at the earliest possible opportunity as I believe it means that we need to start any ASR upgrade sooner than our previous plans had suggested,” he said.

To contact the reporters on this story: Maurice Possley in Los Angeles Superior Court at mauricepossley@gmail.com; David Voreacos in Newark, New Jersey, at dvoreacos@bloomberg.net.

To contact the editor responsible for this story: Michael Hytha at mhytha@bloomberg.net.