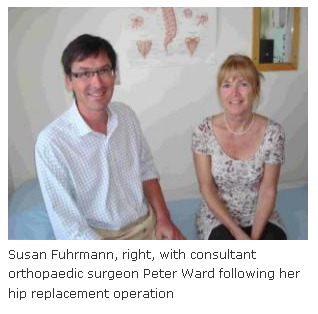 HIP replacement patients at Dorset County Hospital are getting back on the move quicker thanks to a special new recovery programme.

A rapid recovery programme introduced at the Dorchester hospital is allowing most hip replacement patients to be ready to return home within four days and some are able to be discharged after just one or two days.

The Rapid Hip Programme is being led by consultant orthopaedic surgeon Peter Ward and has been well received by patients.

Susan Fuhrmann, from Weymouth, was up and walking just four hours after her hip replacement operation and was discharged home the following day.

She said she was amazed at how quickly she recovered and wants to reassure others facing the same surgery.

Mrs Fuhrmann, 57, said: “Hip replacement surgery is a major operation and people may worry that they will be out of action for weeks afterwards.

“But I came in for my operation one day and was going home the next.

“The day I had it done I was able to walk around the nurses’ station on the ward and by the next day I was ready to go home, it was fantastic.

“Three or four days later I was walking without crutches and now I’m driving again.”

She added: “Mr Ward is a fantastic surgeon and the whole experience has been really brilliant.

“The pain I was living with before my operation was unbelievable, it was impacting on every aspect of my life.

“This hip replacement has given me my life back.”

“In May our patients were in hospital for an average of three days.

“Mrs Fuhrmann is an excellent example of what can be achieved and is a fantastic role model for future patients.”