Computers have become an integral part of everyday life. Virtually all aspects of modern lifestyle depend on computers, be it a washing machine or a modern car. It is therefore no surprise that computers should come to the assistance of surgeons, especially in surgeries where precision is required. Over last decade, extensive research has led to the development of ‘Navigation’ system for use in many surgical fields including Joint Replacement Surgery.

Imagine getting stuck in a middle of a desert with a satellite phone at hand. You can communicate and accurately judge your position on the planet earth with the help of your satellite phone using what is called as global positioning system (GPS). The basic principal in GPS is to track the location of the transmitter that is communicating with the satellites. Satellites triangulate the source of signal to locate the source with pinpoint accuracy. In most major cities abroad, GPS is used in cars for navigation through busy roads. Today, the same principal is assisting the surgeons in various fields to improve the results, and reduce the incidence of complications that can result from technical insufficiencies. The use of navigation technology in the field of Knee and Hip replacement surgery has further helped to improve the results of this already successful surgery.

Joint replacement surgery is a combination of mechanical engineering and surgical skills. The most important aspect of knee and hip joint replacement surgery is to accurately restore the mechanical alignment of the leg. The surgeon measures the angle of deformity, assesses the wear of the joint surfaces and measures the dimensions of damaged or diseased bones, and assesses the status of the ligaments that give stability to the joint during surgery. Until now, all this was done by the surgeon manually, with factor of human error creeping in occasionally. If any imbalance exists in the placement of the artificial joint components, these wear out faster and lead to failure early. Today a well performed total knee replacement with a good quality prosthesis should last 12 to 15 years or more. The improvement in the accuracy of prosthesis placement is expected to improve the results further. Until this technology became available, the surgeons relied on one’s psychomotor skills, mechanical instruments and own judgment in the placement of the artificial joint components.

Computer guided system is also called ‘Navigation’ as it guides the surgeon in all the steps of surgery and even point out errors before they are made. It works like the satellite that detects signals from cars, boats, and other vehicles equipped with special tracking devices. As the surgeon moves an instrument within the patient’s joint, the infrared camera, like the GPS satellite, calculates its position, and then transfers that data to a computer in the operation theater. The computer then shows the direction and location of the instrument. The computer navigates the path of instruments in such a way that the part is fitted in the most optimum position. It also helps in adjusting the ligament tension that is very vital to get a stable joint with good range of motion. It includes a computer console, touch screen monitor and couple of infrared cameras that track the position of the leg and the components. During surgery, the anatomical landmarks are registered and data fed to the computer using dedicated instruments with reflective trackers. Computer generates a bone model that guides the surgeon in virtually all the steps of the surgery. The accuracy of the steps is improved to 0.5 degree and to one millimeter. Apart from improving the precision of bone cuts, the computer also helps in restoring the soft tissue balancing that is critical in getting the desired good results. 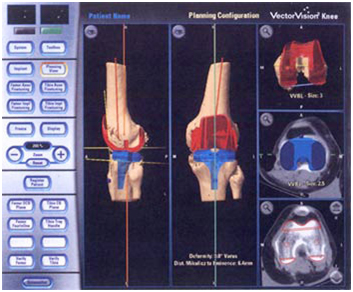 The use of such a technology has certain additional benefits. Since the computer guides the accurate bony cuts, the surgical cut can remain limited with smaller incision and limited soft tissue dissection. Most of the development in the field of joint replacement surgery today is in what is called as ‘minimally invasive surgery’ (MIS). In non obese patients, knee and hip replacement is possible today through a 10 to 12 centimeter incision. The techniques have evolved that minimize or completely eliminate the damage to the muscles, thereby hastening the post surgery recovery. Patients can stand and walk from third day onwards after surgery and can be discharged from the hospital as early as fifth day after surgery. Computer guided navigation assistance further facilitates the minimally invasive surgery.

During conventional total knee replacement surgery, a rod is inserted in the cavity of the thighbone (femur) to set the alignment of the leg. In computer guided navigation surgery, the computer sets the alignment axis and therefore rod does not require to be inserted in the thighbone. Any potential for the bone marrow and fat reaching the lungs and cause fat embolism is thereby reduced.