Creating a longer-lasting hip for patients

Hip replacements have been around as a significant and successful procedure since the mid-1960s. As orthopedic surgeons became more proficient at the procedure and more patients with a variety of hip problems could benefit, the problem of wear soon began to surface. 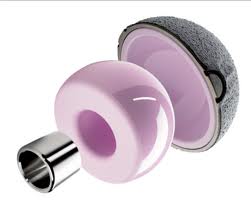 In the early days of hip replacement surgery, the main material used was a common plastic that was refined for medical uses called high molecular weight polyethylene. The problem with this material was that after time debris or small particles of plastic would be pulled off during walking and normal everyday use of the hip replacement. This debris would eventually build up, create inflammation, and lead to loosening of the hip replacement parts and/or bone destruction.

In France in 1970, ceramic-against-ceramic hip replacements were introduced, becoming an ideal surface material because it was hard and wear-resistant. These original hips did reasonably well, but many needed to be revised because the socket component, the part that holds the thigh bone into the hip joint, would loosen. At this time, there wasn’t a good mechanism to hold the socket in place. But by the mid-1990s, new designs and a new generation of ceramic material was introduced in Europe.

These new ceramic hips were introduced in the United States under special Food and Drug Administration (FDA) approved studies called Investigational Device Exemptions. These studies, many of which were conducted in the Philadelphia area, led to the eventual FDA approval of these new ceramic-on-ceramic devices in 2003. These ceramic bearing surfaces have resulted in a reduction of 100 to 200 times in the wear debris generated as compared to the original plastic bearing material. This significant wear reduction has now resulted in the possibility of a hip replacement — even in a young patient — lasting a lifetime.

Since its FDA approval, further improvements in hip replacements have occurred, to further reduce squeaking, an occasional side effect of these low-wear materials, and the already very small risk of breakage. These new or fourth-generation ceramics, with their increased strength, have allowed range of motion and stability to also be optimized in a modern low-wear ceramic hip replacement.

Ceramic-on-ceramic total hip replacements represent a true advance in the materials used in hip replacement surgery to provide a potential lifetime solution for patients with debilitating hip pain. This technology, coupled with experienced surgical implantation and rehab, can lead to a swift recovery and many years of comfort and activity without the fear of the parts wearing out.

— Jonathan Garino, M.D., is an orthopedic surgeon on staff at Paoli Hospital. Garino is an international expert on bearing materials used in joint replacement surgery and has participated in the studies of several hip replacement designs, all of which are FDA approved.

2 thoughts on “Creating a longer-lasting hip for patients”